10. Astonishing X-Men #19: Yeah, seems a lot of critics and some fans are being turned off by the series of late but I still quite enjoy it. Issue 19 gives a nice glimpse of the Breakworld, where Ord, is from. Also some very nice X-Men moments, especially with Colossus. there is a real neat cliffhanger that has me antsy for the next issue and that's what a good comic should do. However, the real star is John Cassaday whose put together probably the best looking issue of the series since it restarted. I don't care what anyone says, astonishing X-Men rocks.

9. DMZ #14: last months #6 drops to #9 but that isn't bad. This issue of DMZ is the second part of Public Works where undercover reporter Matty is working for the Trustwell organization, rebuilding part of Manhattan, and trying to get the scoop. This issue has him become more a part of the terrorist cell working to disrupt them from the inside. There's a brutal hostage scene and a downer of an ending. Or what looks to be a downer of the beginning of issue 15. Brian Wood and Riccardo Burchielli are definitely on top of their game with this book.

8. Welcome to Tranquility #1: Honestly, I haven't been feeling Gen 13, was one of the few not enjoying Secret Six, and just skipped All new Atom(maybe I'll try the trade) but damn it if Tranquility is a marvelous new series. About a retirement community for aging superheroes and adventurers where sheriff Lindo tries to keep everything safe in the relatively quiet community. Except the occasional airplane crashes, young snappy villains dropping by for trouble, or two former enemies renewing their rivalry over an apple tree. The ending is a definitely out from left field and the Neil Googe art is enjoyable. Check it out.

7. Manhunter #26: Back from the dead! Kate Spencer is now one of the top defense lawyers and is working her magic with Princess Diana as he stands trial, this time in the states, for the death of Max Lords. In return Diana has decided to help train Kate. That's the main storyline with B and C plots featuring Mark Shaw, Dylan Battles, and Cameron Stewart. Javier Pina with new inker Robin Riggs makes the book look its best since Jesus Saiz. Topped off with two covers, one from Arthur Adams and another from Phil Jimenez and you have another great Manhunter. BUY IT NOW!!!!!!

6. Checkmate #9: Greg Rucka and Jesus Saiz continue strong on the wonderful Checkmate series. Second part of Pawn 502 has the Black Queen Sasha Bordeux clashing with Sarge Steel of the DEOs Dept. of Metahuman Affiars which put one of their undercover oepratives in prison and endangered a long term undercover op. Now the two sides have to figure out how to get the pawn back in with the Kobra organization. They get a little help from a certain new group of DC characters. Rucka knows how to escalate the action and pull out twists and Saiz is one of the future bests and his rendition of the Shadowpact is nicely done.

5. Spirit #1: Darwyn Cooke=awesome. Now, I'm not a big Spirit fan but Cooke got me to check out this issue and it is wonderful. The legendary vigilante looks to save reporter Ginger Coffee whose been kidnapped by gangsters because she might have incriminating evidence on a certain mob boss. The moments between the two are nice, the art is amazing, and the book in general just has the feel of the kind of Bronze Age Marvel books I like. fun, action packed, with larger then life scenes. Thanks Cooke, you the man. 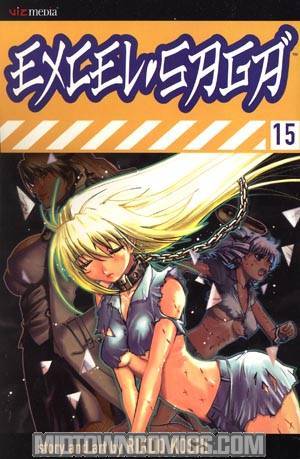 4. Excel Saga Vol. 15: One reason I'm doing those summaries on Excel Saga is because reading through Vol. 15 made me want to remember where it started and how it developed. Volume 15 picks up with Hyatt with amnesia living with Watanabe, part of the dept. of Environmental security while Egala and Excel are in a women’s prison. It seems like the same silly fun but something happens and the book takes a turn to the more serious as Il Palazzo retrieves his soldiers and finally initiates plans to take over the City of Fukoaka, by using economy as his weapon. I haven't read a single comic in the last few years that has left me nervous for the next part as this one.

3. Birds of Prey #101: I gave it #1 last time, this time it's #3. This issue features our girls being attacked by jet fighters, Manhunter starting work on a secondary mission of Oracles, and a little information about the relationship(past, of course) between Spy Smasher and Oracle. Its big bad action sequences, clever dialogue, thrilling moments, and a cast of characters cooler then damn near any superhero team in comics. Nicola Scott may not be my fav BoP artist but she can get the job done, and kick ass doing it.

2. Detective Comics #826: Done-in-one Batman stories that Paul Dini have been doing are great. But this issue... this is the best yet. After robin gets chased by some gangsters he ducks into the car of a good Samaritan who turns out to be the Joker. Joker begins his usual torture on the boy Wonder and Robins got to figure a way to save the day. Dini, you just keep me glued to the world of the Dark Knight. for months I've been complaining about how I can't get a handle of Robin because he's written so differently book to book but here-this should be how robins written. Kramer does a great job, besides making Dick Grayson look too much like Bruce Wayne. All in all, the best Batman issue of 2006 quite possibly. And starring Robin, what are the chances?

1. Justice Society of America #1: Geoff Johns... I'm sorry man but Teen titans doesn't do it for me, 52 and Action Comics are cool but not my favorite books, IC burnt out half way through, and Green Lanterns enjoyable but for months I've been feeling we've gone our separate ways. Then you return to the JSA and make me come back. Reading through the first issue of the relaunch had everything I loved about JSA and what makes it one of my favorite runs of all time(issues 1-75). The JSA staples from the old guard to those who've become staples in the DCU and the new characters like the new Starman. But the twists, the growing threats, and the Dale Eaglesham art. Praise you DC. Thank you for this. thank you, I needed the JSA back.
Posted by aoy at 11:11 AM