Can't, for the best of me, figure out exactly what this comic is about other than a runaway in Coney Island and the people he's meeting. However the oddness and beautiful artwork by Lolos edged this into my top 10 another month in a row.(last months top 10 is on my Myspace so we'll ignore that.) This issue has our mystery runaway(unless I somehow missed his name), now one eyed, pick pocketing people until he's spotted by the cops. A motley group called the pirates pick him up for the save and recruit him into their group. They even give him a patch. Just a beautiful looking book with the same enticing storytelling Rick Spears used on Teenagers From Mars. Great stuff.

Take the talents of one Darwyn Cooke and hook him up with an amazing artist in Tim Sale and what you have is gold. That's right, GOLD! The first issue in one of this new Superman title is set in the early days of Clark Kent's career as the protector of Metropolis. The story is set around Superman's first encounter with Kryptonite but in part one we get a slamming fight scene with the Royal Flush Gang all while Clark, Lois Lane, and Jimmy Olsen are looking to nail Casino owner Anthony Gallo who they believe is attributing to the rise of crime in Metropolis. This is my first time reading Cooke as only a writer but Tim Sale on art is a good match. These two produce an issue that makes one wonder-what is the best Superman title out right now. Makes it sad this tag team made in heavens only doing six issues.

From writer to artist, Darwyn Cooke takes to sequential storytelling in this first ever, and maybe even long awaited, team up between the Dark Knight and classic newspaper comic icon. Written by Jeph Loeb who I admittedly am not sure what to think about half the time, produces a very well done script about villains of both heroes luring certain officers of the law to a special getaway. A trap no doubt to take out both the Batman and the Spirit. The two run into each other and Spirit doesn't believe Batman's Batman because he's a myth the Gotham City police department made up. "Let me assure you-- I am very real." The book has tons of Batman's rogues and some familiar faces from the Spirit. For me, this is probably the best Loeb script I read in a while. I was not impressed with anything but the art on Superman/Batman and Supergirl was corny fun. The real star of course is Darwyn Cooke. The man is amazing with his cartoony, expressive, and very detailed art.

While OMAC Project wasn't my favorite Countdown mini, it certainly produced my favorite spin off in this espionage thriller set in the superhero world of DC Comics. Checkmate is an organization with checks and balances. A white side and a black side with agents corresponding to the pieces in chess. Featuring DC characters like Fire, Mr. Terrific and others. Greg Rucka is one of those writers who builds over time but unlike other writers of the decompression style he still knows when and where to put action sequences to keep the fans contempt to wiat for the break out moment. This series however has been off and running since issue #4 and #8 is the first part in an exciting new arc entitled Pawn 502 about a Checkmate agent trying to infiltrate the terrorist organization known as Kobra. The story has a nice twist ending that I didn't see coming as well as Ruckas great dialogue and handling of such a large cast. Jesus Saiz provides artwork. The regular artist returns after a hiatus to show off his artwork which feels at times like a cross between Neal Adams and Mike Lark. Definitely good stuff.

Matty goes undercover in Trustwell, a company reward with select rebuilding projects within Manhattan to expose the secrets from within. Part one of Public Works starts off strong with the main character getting an assignment from an independent news source to look into Trustwells operations. Once there he sees suicide bombers and workers sabotaging the site. not to mention the Trustwell security have a very hands on interrogation process. When he doesn't report his fellow workers, they offer him a way to make some money. DMZ is a dark, gritty, very realistic comic book about life in a city torn apart by war; in this case civil. These are the comics I tend to disregard but DMZ is strongly written with great art. How can you expect any less of Vertigo whose arguably putting out the best comics today. Even the books I don't care for are still better than most books published but DMZ I do like and is one of the titles I look forward to each and every month. 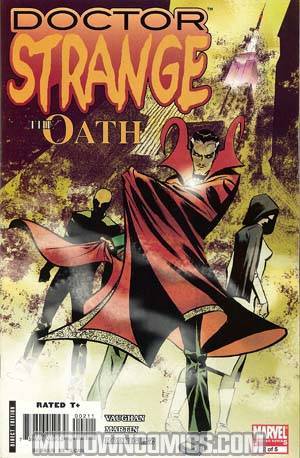 I never cared too much for Doc. Strange. I thought his portrayal in the last defenders mini was amusing but the only reason I picked this bad boy up was for the artwork of Marcos Martin who wowed me on the short lived Breach series. Paired up with BKV who writes the wonderful Runaways series they produce a fun, escapist, and thrilling fantasy/superhero comic. Doc. Strange is looking to relocate a vial of magic elixir stolen form him that could cure his servant Wong of his terminal illness. Assisted by the Night Nurse the three track down the crook who stole the elixir and almost killed Strange. Also, much like issue one, BKV gives those of us unfamiliar with Strange a look into his origin. Thanks BKV. Marcos Martin is one of the most underrated artists working today. If you like Tim Sale and Darwyn Cooke, who themselves are awesome, you should really take a look at Marcos Martins work. It has the same animated feel but still a look all unto it self. Do yourself a favor and check out this gem.

Scott Summers capping away at members of the Hellfire Club while the rest of his team are trying to come to their senses after the mental attacks which were orchestrated by the White Queen/Emma Frost. To add some more problems as My favorite X-Men book by a mile. I really don't know what to say about this title that hasn't already been said by lovers of this book. Great dialogue, wonderful handling of these characters, and amazing art. This issue wraps up the current arc which is more of a lead in to Whedon and Cassadays finale. This book opens with the newly biclops Ord and Danger hit the x-mansion each looking for a level of revenge. Then SWORD drops by to pick the entire gang up and head to the alien planet of Break World. Yeah, this is going to be fun.

books and soon it'll be none. Until then time to enjoy his last arc on Runaways. The book survived cancellation to get rebooted with better sales and now him and artist Adrian It's been awhile since I've bought two consecutive BKVAlphona are leaving with issue #24. The final story, Live Fast, has Chase still reeling after the death of his girlfriend Gertrude. So much so it worries his team mates. Victor even suggest him leaving the group. Chase however has alternate plans as he deals with the Gibborim, the force that the Runaways parents were working with. Chase is looking to resurrect his love but for that he needs to offer a pure soul. As per usual Alphona artwork is brilliant on this series. new artist Mike Ryan is going to have one hell of a time following up as will Alphona to find a title that best exemplifies his talent like this book does. I'm anxious to see where this is going and how Joss Whedon and Mike Ryan plan to follow such an amazing run.

I think a number of critics and fans are giving this book a hard time for no other reason then they didn't like Identity Crisis. I liked IDC but I also enjoyed Meltzer's green arrow arc as well as Benes Birds of Prey work and the little of his Superman I saw. This title is going slow but it's still has some great character moments and some nice action, especially this issue. The scene with Arsenal, Hal Jordan/Green Lantern, and Black Canary taking on dozens of Red Tornado clone-bots. The best stuff has been with Red Tornado himself. Now human, it adds an extra amount of tension with his wife and adopted daughter that if he dies this time he really dies, rather then being an elemental who can live on in robotic bodies. Yes, complex origin but Meltzer made me care for a hero I knew next to nothing about. the mystery villain and his plans add a good level of mystery to this series. Ed Benes art here is strong though I wish Alex Lei was doing his inking and Sno-Cone on colors but it's still a good looking superhero comic. Justice League is only three issues in and I am loving it.

Despite my joking around, Gail Simone is writ ting the one comic I've been buying for the longest time since making my way into comic as a hardcore collector and reader. Issue #100 is an amazing issue that marks another turning point in the series. Now, Black Canary has left the group and oracle has changed her way of operating. Zinda and Huntress are her top operatives with full access to her headquarters but she also employs other female operatives for specific missions. This issue has Huntress and Zinda teaming with Manhunter, Big Barda, and Judo Master to free a teenage girl from a Mexican prison and reunite her with her father. seems easy enough but with a twist in the end you know it's going to get seriously rocky. While new artist Nicola Scott is coming in after the amazing work of the likes of Ed Benes, Joe Bennett and Paulo Sequeria she does a sold job. Not blown away but she has chops and can no doubt get better in time. The back up story gives you background on the exiting Black Canary as she tells her adopted daughter Sin about her life as they plan on moving. Co-written by Tony Bedard and featuring art by outgoing artist Paulo Sequeria(DC better have something for him to do) this is a great origin recap that puts the Mark Waid/Howard Chaykin back up form 52 to shame. Though they did try it in two pages.

So there it is, my top 10 for November. My December one will probably be a tad late with holidays and shipping from Mail Order Comics.
Posted by aoy at 11:36 AM