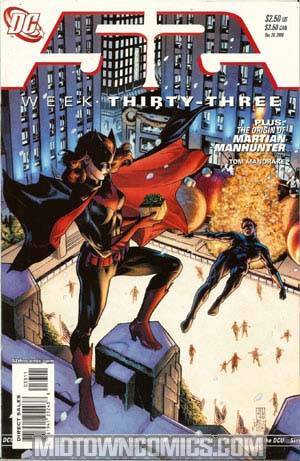 Today's haul included 52 Week 33. Which was alright. Tom Derenicks art didn't bug me, and nice to see more Joe Prado art. Birds of Prey #101 was very good. Though Gail Simone's pulling out some old Oracle(Barbara Gordon, original Batgirl for those who don't know) business back I have no familiarity with. Fables Vol. 8: Wolves which I read most of and warms my heart. Also picked up Wolverine. That's right, the originally mini-series re released. This is old school Chris Claremont(he wrote the best X-Men stories) and Frank Miller(just before he went to DC and went from superstar to legend in a short couple years). look forward to reading it.

Disappointed that I can't find a copy of the trade to Gunsmith Cats: Kidnapped. Though Dark Horse is releasing a series of omnibus so I might just get those. Damn... I would've just liked all the old trades, but I guess newer reprints taking up less room is fine too.

Alright, I've been listening to a lot of Sister Machine Gun. Very awesome industrial band. they started in 1992 and developed a more unique sound. I'm missing only three singles but I don't need them, I got all the albums and EPs. Also been listening to Mindless Self Indulgence limited release Another Mindless Rip Off. Also a special Static X mix of songs from the first four records. Right now I'm making a special White Zombie/Rob Zombie mix.

Saw the new Transformer Movie trailer. It was okay. I'm still scared they'll mess it up. What am I kidding, of course they will. Sad to say I haven't seen too many movies this year. I even missed some that I thought looked real good. that said, I am not missing Pans Labyrinth. best movie I saw this year? Ugh... I'd feel like a total loser to say Jackass No. 2 but it's the most fresh in my mind. Prestige and V for Vendetta were very good but I don't think I'd ever watch those again. Superman Returns and Pirates 2 stood out but... I don't know. I'm such a loser. And so are the professional critics who gave it glowing reviews.

It's closing in to the end of the year, over the next few months I'll be putting together my best of the year for comics and wrestling. Wrestling will be later, just after I get the DVDs for ROHs last two shows of the year(which are filmed this weekend. Go Danielson! Retain the title!). I'll do my fav list of comics of 2006 in January.